By the end of this course, students will be able to:

1) Analyze the theoretical, methodological and epistemological differences between essentialist and constructivist approaches to the history of sexuality.

2) Understand the diversity of sexual cultures within the history and geography of Latin America comparing the peculiarities of each case.

3) Explain how different scholars consider the social construction of sexual identities and practices and their relationship to economics, culture, kinship and social structure.

This course will encourage students to develop a critical analysis through a comparison of the texts. In order to facilitate that goal, the exams will be take-home assignments. Grades will be based on the following percentages:

Class participation involves the active and critical engagement in the debates about the assigned texts. Students should be prepared to discuss the main topics concerning those readings. The course includes the projection of a group of recent movies depicting sexual culture in Latin America, and students should attend at least three of them. On Mondays and Wednesdays before 10:00 am, students must send questions/comments about the texts. For this assignment you can:

1. express your doubts about the topics and the perspective(s) that the author considers,

2. identify paradoxes or contradictions in the analysis,

3. briefly compare other descriptions of the same and different phenomena,

4. criticize the text from an alternative theoretical approach, yours or another authors,

5. suggest topics or themes that you would like to debate in the class.

You do not need to include all these features, but only one or some of them. These questions/comments are meant to encourage class discussion and to prepare the students to develop the kind of analysis that they will need for the exams and/or the research paper. The length of these assignments will be between 5 and 15 lines. If you fail to send these e-mails more than three times it will affect your grade.

Research paper (optional): Students can opt to write a research paper instead of the final exam. I encourage those who are interested in this option to talk to me at an earlier stage of the quarter to discuss the topic and its possibilities. The research paper requires the critical analysis of primary sources in order to explore a topic in the history of sexuality in Latin America. Considering that most of the sources were written in Spanish or Portuguese, those students who are interested in Latin American cultures and languages could take advantage of this opportunity. This optional assignment should turn to the theoretical approaches discussed in the course bibliography and establish comparisons with other cultures and historical moments within Latin America.

Class attendance is a fundamental component in the process of learning. More than two absences will lower your grade. If for any reason, the student compiles four absences, that student may be asked to withdraw from the course. If you have to miss classes due to an illness, please make sure to bring a doctor’s note. Please let me know in advance if there is any other reason why you cannot attend a class. You will still be expected to complete your assignments (questions/comments, mid-term, final exam) on time. If you have any problems doing so, please contact me to explain your situation at least two days before the due date; otherwise, late assignments could lower your grades. Students are also expected to be on time and should not leave class early without prior notification.

Warning: presentation of the words or ideas of another as one’s own is plagiarism and constitutes a serious offense.

Garza Carvajal, Federico, “Vir: An Emasculation of the ‘Perfect Sodomy’ or Perceptions of ‘Manliness’ in the Harbours of Andalusia and Colonial Mexico City, 1560-1699,” Prepared for delivery at the 1998 meeting of the Latin American Studies Association, The Palmer House Hilton Hotel, Chicago, Illinois, September 24-26, 1998.

Nesvig, Martin, “The Lure of the Perverse: Moral Negotiation of Pederasty in Porfirian Mexico,” Mexican Studies, 16 (2000).

Wednesday 9th February:
Brazil
Caulfield, Sueann. “The Birth of Mangue: Race, Nation, and the Politics of Prostitution in Rio de Janeiro.” In Balderston and Guy, Sex and Sexuality in Latin America, 86-100

Wednesday 9th March:
Discussion class. Conclusions of the course. Doubts about the exam or research paper.

If you have appropriate syllabi, please contact CLGH chair Karen Krahulik at Karen_Krahulik@brown.edu.

Johnson, Emily Suzanne, This is Our Message: Women's Leadership in the New Christian Right

Women have been at the forefront of the modern religious right since its emergence in the 1970s. This book examines the careers of six prominent conservative evangelical women over the past fifty years. Their stories act as microcosms for the movement as a whole, including its complicated relationship with sexuality; from Marabel Morgan’s spicy (but firmly heterosexual) sex advice, to Anita Bryant’s anti-gay-rights campaign, to Tammy Faye Bakker’s surprising second act as a queer icon. 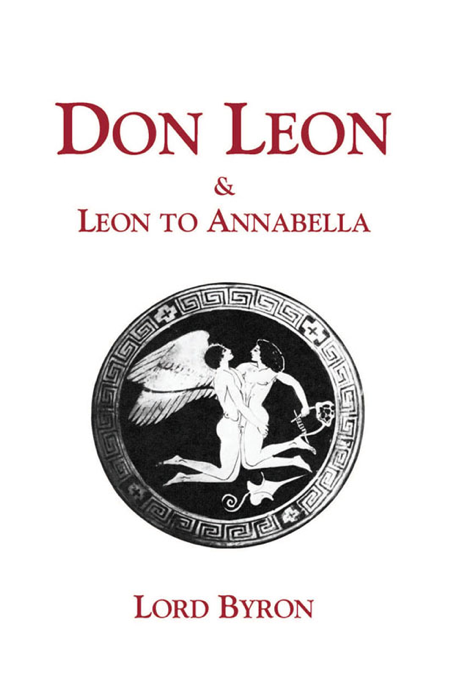 The first scholarly edition of Don Leon, a literary masterpiece and a Gay Liberation landmark. For the first time all surviving editions have been collated, and all foreign language passages in the invaluable original notes have been translated.  This book is of great value to gay historians and students of Romanticism.  It can be read for pleasure by anyone who loves poetry.

Royles, Dan. To Make the Wounded Whole: The African American Struggle Against HIV/AIDS

To Make the Wounded Whole offers the first history of African American AIDS activism in all of its depth and breadth. Dan Royles introduces a diverse constellation of activists, including medical professionals, Black gay intellectuals, church pastors, Nation of Islam leaders, recovering drug users, and Black feminists who pursued a wide array of grassroots approaches to slow the epidemic's spread and address its impacts. 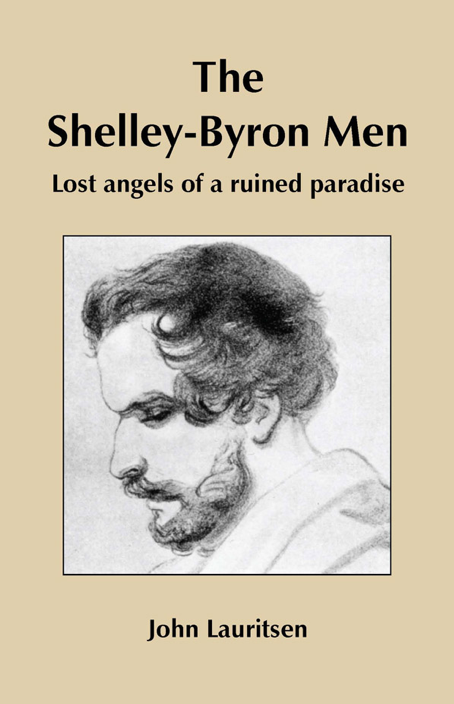 John Lauritsen examines the lives and writings of a circle of man around the two most famous poets of English Romanticism: Percy Bysshe Shelley and Lord Byron.  He finds abundant expressions of homoeroticism in their lives and writings, and places all in historical 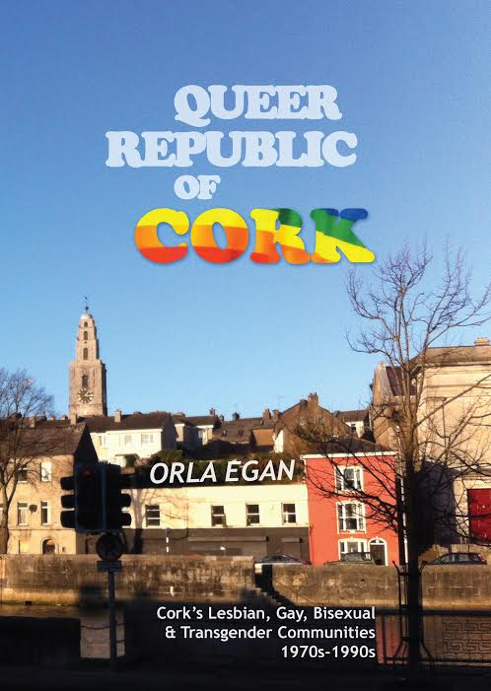 Cork, Ireland’s second largest city, has a long and rich history of LGBT activism and community development. The Cork LGBT community played a vital role in campaigning for LGBT rights and social change in Ireland.  This book takes readers on a journey through the development of Cork’s lesbian, gay, bisexual and transgender communities from the 1970s to the 1990s, providing valuable insight into the development of a vibrant and active LGBT community.

This book brings together 200 primary sources from before, during, and after the Stonewall Riots (1965-1973), with an introduction that reviews multiple ways of interpreting and analyzing the transformative LGBT uprising. 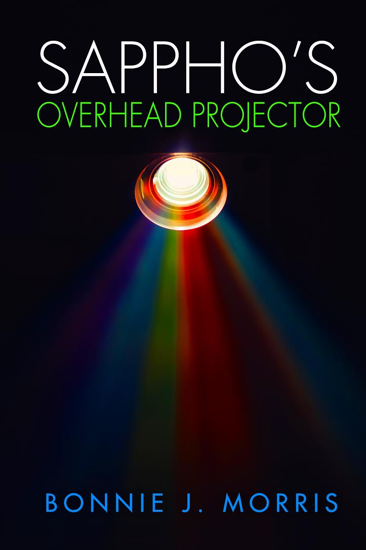 A tribute to the cultural power of twentieth century lesbian literature, this time-travel mystery is set at a haunted Library of Congress. Ghostly lesbian authors begin to reach out to a scholarly intern, begging her for help in saving their works from being shredding or digitized out of circulation. 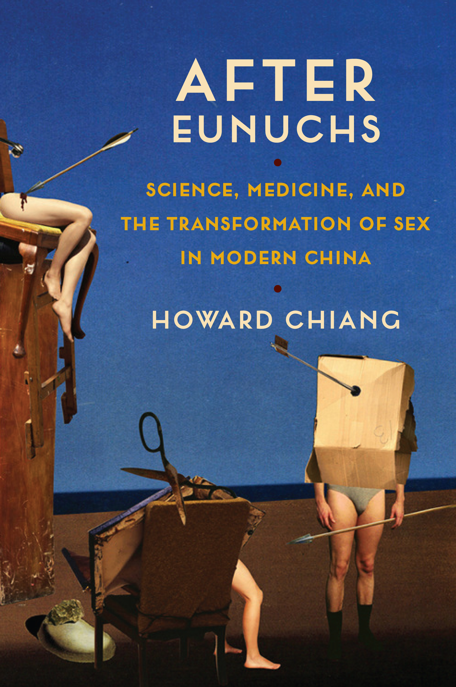 Chiang, Howard, After Eunuchs: Science, Medicine, and the Transformation of Sex in Modern China

From anticastration discourses in the late Qing era to sex-reassignment surgeries in Taiwan in the 1950s and queer movements in the 1980s and 1990s, After Eunuchs explores the ways the introduction of Western biomedical sciences transformed normative meanings of gender, sexuality, and the body in China. 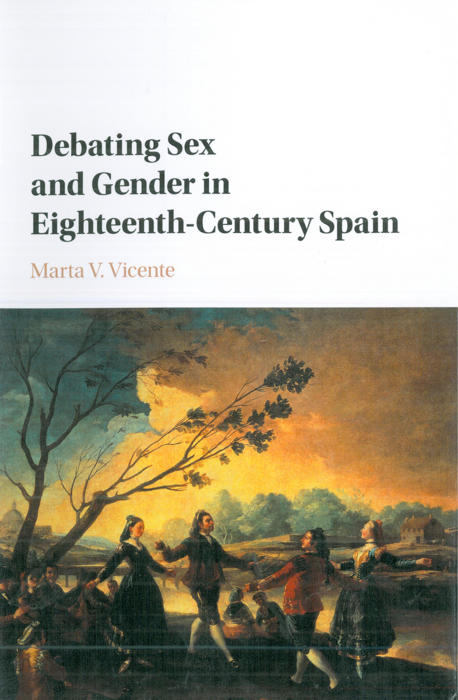 The book studies the creation of a two-sex model of human sexuality based on different genitalia within Spain, reflecting the enlightened quest to promote social reproduction and stability. Drawing on primary sources such as medical treatises and legal literature, this study traces the lives of individuals whose ambiguous sex and gender made them examples for physicians, legislators and educators for how nature, family upbringing, education, and the social environment shaped an individual's sex. 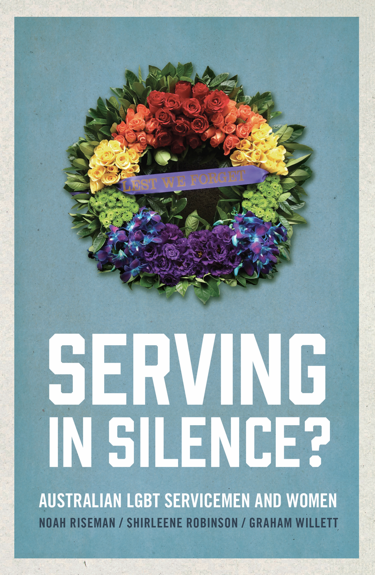 This is the first book to examine the histories of lesbian, gay, bisexual and transgender people who served in the Australian armed forces in the post-Second World War era. It uses four life stories to chart the changing experiences of LGBT service members, from times of tolerance, witch-hunts, abuse, through to the present-day when the Australian Defence Force advocates policies of inclusion. 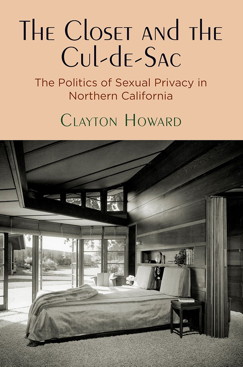 Howard, Clayton, The Closet and the Cul-de-Sac: The Politics of Sexual Privacy in Northern California

This book traces the ways that suburbanization reshaped the history of sexuality from World War II to the late 1970s.  Focusing on the San Francisco Bay Area, it follows the outward migration of white, married couples with children to the Peninsula and South Bay and the growth of LGBT communities in San Francisco.  During the sexual revolution, many suburbanites distanced themselves from what they saw as the extremes of the religious right and gay liberation. 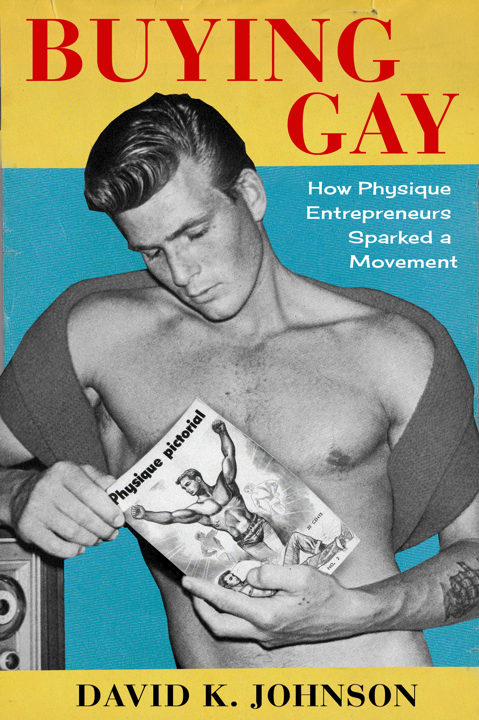 Providing a vivid look at the producers and consumers of physique magazines, Buying Gay explores the connections―and tensions―between the gay market and the gay movement. It chronicles a network of photographers, artists, book club owners, and pen-pal club organizers that fostered community while challenging Post Office surveillance, paving the way for open expression of homoerotic desire. It argues that gay commerce was not a byproduct of the movement but a catalyst to it. 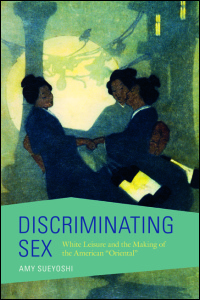 Amy Sueyoshi, Discriminating Sex: White Leisure and the Making of the American Oriental

Discriminating Sex details how middle class white expansion of their own gender and sexual norms marked the formation of the pan-Asian “Oriental,” a deeply sexual racialized stereotype, more than a hundred years ago. 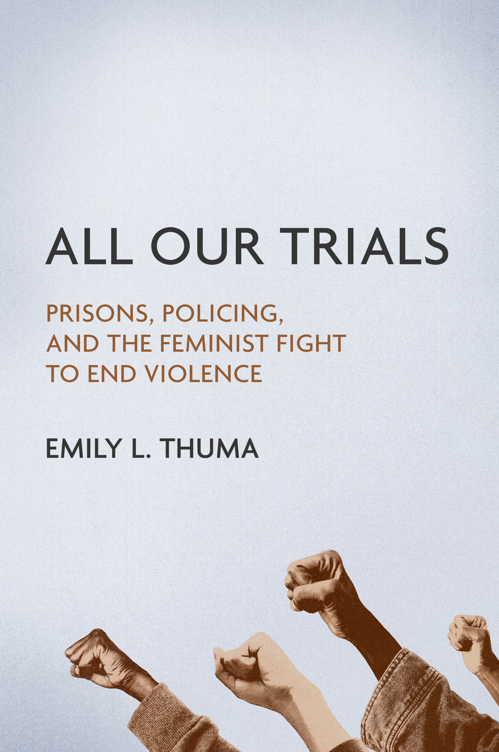 Thuma, Emily L., All Our Trials: Prisons, Policing, and the Feminist Fight to End Violence

During the 1970s, grassroots women activists in and outside of prison forged a radical politics against gender violence and incarceration. Emily Thuma explores the work of these activists who placed criminalized women, and the multiple violences they confronted, at the heart of their organizing. In the process, All Our Trials illuminates a crucial chapter in a struggle that continues in today's movements against mass incarceration and for transformative justice.

Bost, Darius, Evidence of Being: The Black Gay Culture Renaissance and the Politics of Violence

In Washington and New York during the 1980s and ’90s, gay black men banded together, using creative expression as a tool to challenge the widespread views that marked them as unworthy of grief. At once a corrective to the predominantly white male accounts of the AIDS crisis and an openhearted depiction of the possibilities of black gay life, Evidence of Being above all insists on the primacy of community over loneliness, and hope over despair. 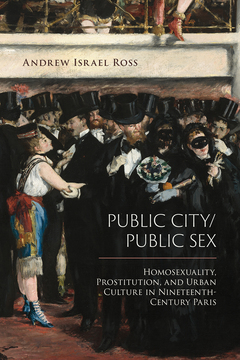 This book traces the struggle to control sex in public and argues that it was the very effort to police the city that created new opportunities for women who sold sex and men who sought sex with other men. Placing public sex at the center of urban history, Ross shows how those who used public spaces played a central role in defining the way the city was understood. 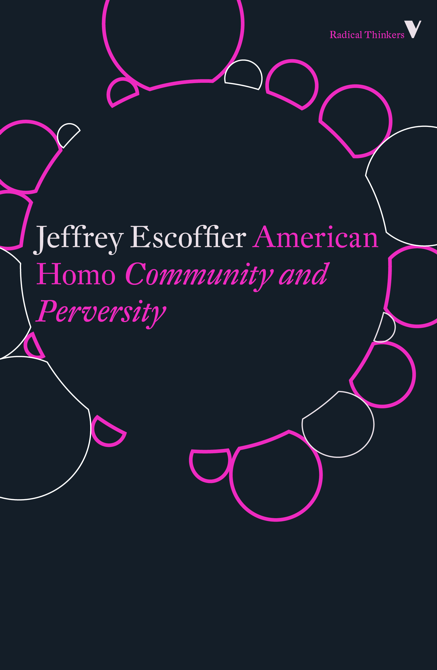 Escoffier explores sexual revolution as an historical process rather than a single event and he identifies the formative role of LGBT struggles within it, and how LGBT agency and queer vernacular knowledge were essential elements in establishing the conditions for radical change. Although every new success enabled a normalizing form of domination, the exercise of democratic action helped to increase the benefits of community and the freedom of sexual perversity. 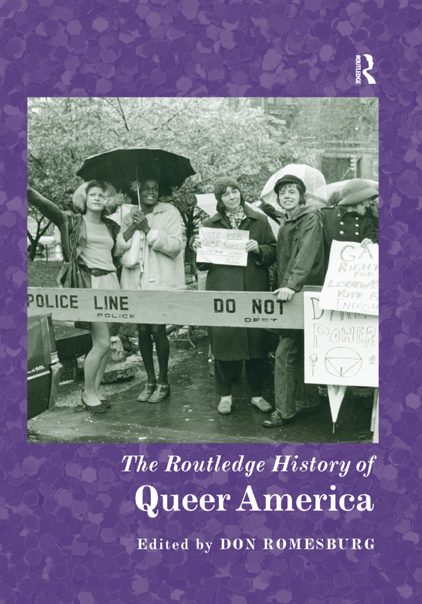 The Routledge History of Queer America presents the first comprehensive synthesis of the rapidly developing field of lesbian, gay, bisexual, transgender and queer US history. It features 28 chapters on essential subjects and themes from colonial times through the present, gathering field authorities to define the ways in which sexual and gender diversity have contributed to the dynamics of American society, culture and nation.

Sutton, Kate. Sex between Body and Mind: Psychoanalysis and Sexology in the German Speaking World, 1890s-1930s

Ideas about human sexuality and sexual development changed dramatically across the first half of the 20th century. This is the first book to closely examine vital encounters among this era’s German-speaking researchers across their emerging professional and disciplinary boundaries. Sutton charts how the emergence of two separate approaches to the study of sex, sexology and psychoanalysis, were always part of a dialogic and competitive process.